Celebrating 40 Years of The Best Ideas in Medicine 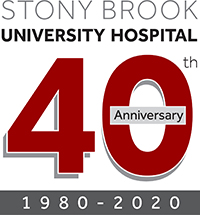 In 1980, Stony Brook University Hospital first opened its doors and became the region’s first academic medical center. The hospital, together with the Health Sciences schools, were founded in response to a report commissioned in 1963 by then New York State Governor Nelson Rockefeller.

Construction of the 504-bed hospital began in 1973 and was completed in June 1978 at a cost of approximately $150 million. The 325-foot, 19-story structure occupied nearly three-quarters of a million square feet.

By 1980, after a year of mass recruitment of staff, the hospital employed 800 people. On Feb. 18, the first two patients were admitted to the hospital, and on May 24, Stony Brook University Hospital was formally dedicated. After the hospital officially opened, many milestones were reached, and distinctions came quickly.

Take a journey throughout the years to learn more about Stony Brook Medicine’s history: