An Emotional Story with a Happy Ending at Stony Brook Children's

The headlines of various local and regional media spread the news of this highly emotional story with a happy ending, which took place at Stony Brook Children’s Hospital: 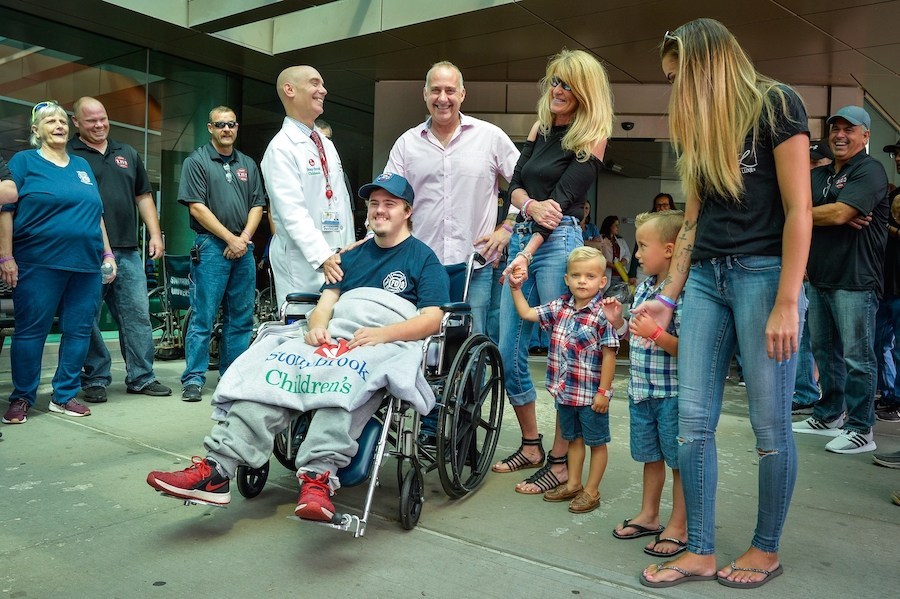 Christopher S. Muratore, MD, chief of pediatric surgery, and his team at Stony Brook Children's performed a series of three operations to save the life of 19-year-old Thomas Spiotta who had developed life-threatening blood clots in his portal vein, the blood vessel that carries blood from the gastrointestinal tract, gallbladder, pancreas, and spleen to the liver.

“The portal vein is one of the major veins bringing blood back from all of the intestines to the liver,” Dr. Muratore explains.

Because of the clots, the young man’s intestines began to die. To save him, Dr. Muratore and his team performed three major operations, removing about three feet of intestines.

“We identified the major veins with the clot in it, and we opened up the vein to remove the clot, then used a clot-busting medication to help restore some of the blood flow,” says Dr. Muratore.

After seven weeks of hospitalization, the patient was discharged on August 27. He was greeted by a cheering crowd of fellow firefighters as he left the hospital.

Before the departure, a press conference took place where the patient’s mother said she believed her son had been saved by a miracle. Our clinicians may not be divine, but they provide the highest level of pediatric care at Stony Brook Children’s.

Check out the story on some of the various local and regional media that covered it:

For consultations/appointments with our pediatric specialists, please call (631) 444-4545