Stony Brook Was the First on Long Island to Provide TCAR 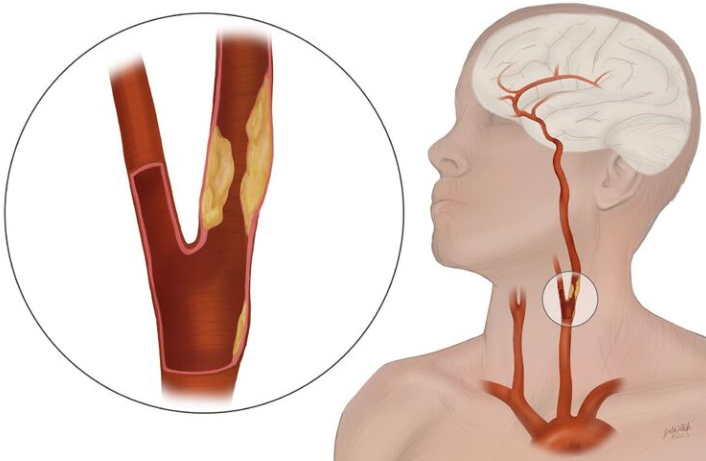 A potential complication of both surgery (carotid endarterectomy, or CEA) and stenting for stroke prevention in patients with carotid artery disease is a stroke occurring during the procedure itself. Studies have shown a higher risk of stroke during conventional stenting as compared to surgery.

The new minimally invasive transcarotid artery revascularization (TCAR) procedure that uses a special transcarotid neuro-protection system (NPS) is designed to reduce the risk of stroke during the insertion of the stent.

The novel NPS device allows the surgeon to directly access the common carotid artery in the neck and initiate high-rate temporary blood flow reversal to protect the brain from stroke while delivering and implanting the stent.

The TCAR procedure is performed through a small incision at the neckline just above the clavicle. This incision is much smaller than a typical CEA incision. The surgeon places a tube directly into the carotid artery and connects it to the NPS that directs blood flow away from the brain, to protect against plaque that may come loose reaching the brain.

The TCAR procedure offers patients a safer method of carotid stenting through a small incision at the base of the neck and direct carotid artery access along with neuro-protective flow reversal during delivery of the stent.

The patient's blood flows through the NPS and any material is captured in a filter outside the body. The filtered blood is then returned through a second tube in the patient's upper leg. After the stent is placed successfully, flow reversal is turned off and blood flow resumes in its normal direction.

TCAR not only obviates the need to navigate catheters through the aortic arch (a step linked to stroke during carotid stenting through the groin), but also prevents fragments of plaque released during stenting from travelling with the bloodstream to the brain and causing small or bigger strokes.

"At the Stony Brook Vascular Center we treat all aspects of vascular disease frequently including high-risk patients that are turned away by other physicians and hospitals.

"Offering this new minimally invasive treatment option for our patients with carotid artery blockage is advancing patient care here by dramatically reducing the risk of stroke and heart attack during and after carotid interventions.

"In contrast to conventional carotid endarterectomy surgery, TCAR requires a smaller incision resulting in decreased risk for nerve damage and a faster recovery time. With its ingenious flow-reversal system, TCAR also has been shown to have fewer stroke complications compared to carotid stenting performed through the groin."

Click here for stories of patients treated successfully with TCAR. Watch these videos about carotid artery disease and the TCAR procedure: