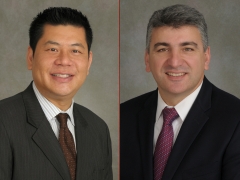 The first PEVAR at Stony Brook Medicine was done in April 2013. Since then, over a dozen patients have undergone the procedure with excellent results, and more patients are asking for it.

PEVAR is the latest form of advanced minimally invasive treatment of abdominal aortic aneurysms (AAAs). It does not require a surgical incision, which makes it especially attractive to patients.

Patients seeking treatment for abdominal aortic aneurysms may now undergo a repair procedure that does not require a surgical incision.

Patients who have PEVAR often experience even less pain and discomfort than with traditional endovascular aneurysm repair (EVAR), leading to even faster recovery and no need for narcotic medications.

Our vascular surgeons' use of PEVAR further distinguishes the care provided by the multidisciplinary Stony Brook Aortic Center, which is the only center of its kind in our area for patients with aortic conditions. Our aortic specialists are committed to using the latest technologies to provide the best possible treatments.

"The majority of patients with AAA are candidates for PEVAR," says Shang A. Loh, MD, assistant professor of surgery and one of the leaders of the Aortic Center.

"Eligibility for PEVAR depends greatly on the quality of the femoral arteries in the groins which are the access sites for EVAR. Factors such as calcium content and atherosclerotic disease in these vessels may preclude the ability to use the PEVAR technique."

"The PEVAR technique is especially attractive for certain patients, such as those who are obese or diabetic, because it minimizes potential wound infections."

Food and Drug Administration (FDA) approval of PEVAR was given in April 2013, based on the outcomes of the first prospective, multicenter, randomized clinical trial (the PEVAR trial); the latest report describing the trial was published in the Journal of Vascular Surgery. 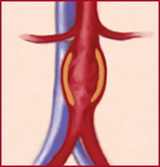 AAA ("triple A") is a bulging, weakened area in the wall of the abdominal aorta — the body's largest artery — resulting in an abnormal widening or ballooning, something like a bulge on an overinflated tire.

A potentially life-threatening condition, AAA has been dubbed the "silent killer" because it seldom gives warning signs. AAA is fatal in most cases if the aneurysm ruptures before being repaired.

Therefore, early detection and repair are crucial. (Click here for information about our free-of-charge AAA screening program provided by the Vascular Surgery Division.)

An estimated one million Americans live with an undiagnosed AAA — including 20,000 in Suffolk County alone. According to the Centers for Disease Control and Prevention, AAA is more common in men and in individuals aged 65 years and older, particularly those with a current or remote history of smoking and with a family history of aneurysms.

To repair the AAA, the surgeon uses two small puncture sites in both groins, as there is no need for an incision. The endovascular (within the vessel) repair involves a self-expanding stent that seals off the aneurysm, maintaining blood flow without risk of rupture. The patient typically goes home the day after surgery, and has minimal, if any, discomfort.

Traditional open surgical repair of AAA involves an extensive operation involving a long abdominal incision. The approach to repair changed dramatically in the late 1990s, when the FDA approved EVAR, a minimally invasive procedure that requires relatively small incisions made in each groin to access the femoral artery.

During that same period, surgeons began to investigate performing EVAR through a small puncture site in the skin above the femoral artery in the groin, rather than through a surgical groin incision. The first published report appeared in 1999.

Patients who undergo PEVAR may find it hard to believe that their aneurysm has been repaired because the procedure is practically non-invasive.

In PEVAR, the stent graft is inserted through the puncture site, under fluoroscopic guidance, and finally deployed in the aorta.

The hole in the artery is closed using a series of sutures placed through the skin puncture site, which itself is so small that it heals without any sutures. Once the stent is released within the aneurysm, blood flows through the new graft. The aneurysm, then, slowly shrinks and is no longer a threat to the patient.

"We have used PEVAR to treat twelve patients so far at the Stony Brook Aortic Center, and have had excellent results," says Apostolos K. Tassiopoulos, MD, professor of surgery and chief of vascular surgery, who is a co-director of the Aortic Center.

"Not everyone is a candidate for this procedure, however," Dr. Tassiopoulos adds, "because patients must have large enough femoral arteries with minimal arterial calcification, and meet other selection criteria. That said, the benefits of PEVAR will certainly appeal to AAA patients who should ask to be evaluated for it."

For consultations/appointments with our vascular surgeons, call 631-444-2683.