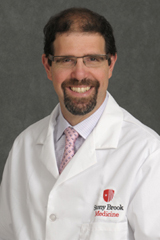 Pancreas cancer is a deadly disease. It is estimated that over 53,000 people will be diagnosed with this cancer in the United States each year, according to the American Cancer Society. Fewer than 20% of cases, unfortunately, are caught early enough to be surgically removed.

Pancreas cancer tends to go undetected until it is advanced. It grows fast in most cases. By the time symptoms of the cancer occur, diagnosing it is usually relatively straightforward.

Survival rates are low because fewer than 10% of patients' tumors are confined to the pancreas at the time of the diagnosis. In most cases, the malignancy has already progressed to the point where surgical removal is impossible.

When diagnosed early, surgery offers the best chance for long-term control of pancreas cancer. For this reason, tests sensitive enough to detect pancreatic cancer in the earliest stages are needed, so that patients can receive surgical treatment.

Here, Aaron R. Sasson, MD, professor of surgery and chief of our Surgical Oncology Division, answers frequently asked questions about the early detection of pancreas cancer. A renowned specialist in the management of pancreas cancer, Dr. Sasson himself is currently engaged with the development of screening tests for it.

Q: How is pancreas cancer diagnosed?

A: Since most cancers of the pancreas originate in a location called the head of the pancreas, the majority of patients typically present with jaundice. As the cancer gets larger, it can obstruct the flow of bile into the intestines which results in the yellow discoloration in the eyes, yellowish-orange changes in the skin, itching, and very dark color urine. Surprisingly, with the increasing use of CT scans to evaluate symptoms such as cough and kidney stones, approximately 20% of pancreas cancers are being detected "accidentally."

Q: Can pancreas cancer be found early enough to survive it?

A: Yes, most definitely. Unfortunately, only a small minority of patients with pancreas cancer are "cured." The smaller the size of the cancer, the greater the chances for cure.

At Stony Brook we are part of a consortium that plans to investigate various
blood tests for early detection of pancreas cancer.

Q: Why is pancreas cancer so deadly?

A: There are multiple reasons. The majority of patients with pancreas cancer are "incurable" when they are diagnosed. They either have cancer spread or have tumors that are involving important surrounding structures and are not removable. Secondly, there is often surrounding dense thick tissue that prevents chemotherapy from reaching the cancer cells. This accounts for the poor response to most chemotherapy agents.

Q: What are the risk factors for pancreas cancer?

A: The most important one is age. This cancer typically affects patients in the sixth and seventh decade of life. Although patients younger than 40 can get pancreas cancer, this occurs very rarely. It is believed that cigarette use and obesity account for almost 50% of all pancreas cancer cases.

Q: What happens if a suspicious lesion is found?

A: All abnormalities of the pancreas require investigation. Typically, a specialized imaging test, such as a CT or MRI designed to specifically evaluate the pancreas, is all that is required. Patients who have a pancreas cyst may require lifelong surveillance, as certain pancreas cysts can become cancerous. In patients who require further investigation a biopsy may be warranted. Some patients with very suspicious pancreas lesions may not require a biopsy, and may need to have surgery to remove that portion of the pancreas.

Q: What about screening for pancreas cancer?

A: Despite the fact that pancreas cancer is the 4th-leading cause of cancer deaths, the incidence (the number of people who get pancreas cancer) is low, which makes screening programs less reliable. Additionally, the best screening test has not been identified.

Q: What is the status of efforts to develop blood tests and urine tests?

A: This is an area that is receiving a lot of attention and undergoing active research. Currently, there is a blood test for pancreas cancer (CA19-9). It is useful for monitoring the growth of pancreas cancer. In general, a rising value is concerning for increasing tumor growth, although this test is NOT useful for screening, as numerous other non-cancerous conditions can cause the test results to be elevated.

Q: Is there a relationship between diabetes and pancreas cancer?

A: There is no association between type 1 diabetes and pancreas cancer. In contrast, there is mounting evidence that type 2 diabetes, in a small minority of patients, may be a symptom of pancreas cancer.

Q: What is the Stony Brook Medicine advantage for the early detection of pancreas cancer?

A: Here at Stony Brook, in conjunction with endocrinologists, gastroenterologists and pathologists are currently in the research and development phase, and plan to launch a unique pancreas cancer screening program for patients with newly diagnosed type 2 diabetes. Furthermore, we are part of a consortium that plans to investigate various blood tests for early detection of pancreas cancer.

Learn about pancreas cancer from the American Cancer Society. Learn more about early detection from the Pancreatic Cancer Action Network.