Hamptons Gynecology and Obstetrics was founded in 1971 to provide high quality, efficient gynecological and obstetrical care to the women of the East End. At the present time, care is provided by eight doctors, three nurse practitioners and two midwives. We maintain four offices, Southampton, Riverhead, Hampton Bays and Center Moriches. The doctors are all on the staff of Southampton Hospital.

In response to patient demand, all of our doctors have signed contracts with many managed care companies in recent years. The group also provides care through several local clinics, and all of our doctors speak to local groups, as well as conducting educational seminars in our offices. All of these efforts support our overriding goal - to provide quality care to all patients.

Hamptons Gynecology and Obstetrics has staff members who provide translation for our Spanish-speaking patients. 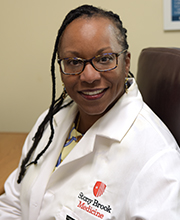 Dr. Rolston is board certified in obstetrics and gynecology by the American Board of Gynecology and is a fellow of the American College of Obstetricians and Gynecologists. Dr. Rolston obtained her medical education at Morehouse School of Medicine in Atlanta, GA and completed her residency at Renaissance School of Medicine at Stony Brook University. She is a member of the New York State Medical Society, Suffolk County Obstetrical and Gynecological Society and is a member of the board of directors at Southampton Hospital since 2009. Dr. Rolston previously served as a Chairperson of the Department of Obstetrics and Gynecology at Southampton Hospital (2001-2003), as a member of the executive committee at Southampton Hospital (2001-2003) and President of the Suffolk County Obstetrical and Gynecological Society (2008-2009). Dr. Rolston's special interest include cancer screening and menopause management. 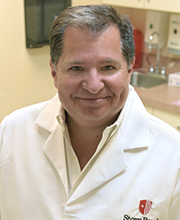 Dr. Alamia came to medicine after eight years of running his family's food business. He lost a child to a severe heart condition and decided that he would spend his life pursuing a career where helping and improving patients' lives are his primary focus.

He then started college at SUNY Stony Brook, where he was accepted into the Scholars for Medicine program and received early admission to Stony Brook medical school. He did his Ob/Gyn residency at Stony Brook and, when done, joined Hamptons Gynecology in Southampton. He is chairman of Ob/Gyn at Southampton Hospital, a fellow of ACOG, a diplomat of the American Board of Ob/Gyn, and a founding member of women's health professionals. He has been voted a patient choice award and most compassionate MD award every year since 2009.

True to his original goal of a life pursuant to helping people, once a year, he travels the world with ISMS to operate for free in third world countries. He has been an active board member since 2003 and has been to Brazil, Peru, India, Egypt, Honduras, Nicaragua, Kenya, Zambia, and Chile. His interests include minimally invasive surgery, high-risk obstetrics, and ultrasound. 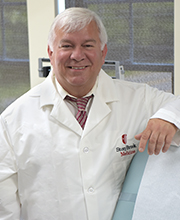 Dr. Segarra was born in Cuba but has lived in New York since 1968, where his father, an Ob/Gyn, established a private practice in obstetrics and gynecology.

Dr. Segarra attended Columbia University in New York City and graduated in 1979 with a Bachelor of Arts degree. He then attended New York Medical College, from which he graduated in 1983, and completed residency training in obstetrics and gynecology at Lenox Hill Hospital in New York City in 1987. Dr. Segarra entered private practice with his father in 1987 and continued as an attending physician, Senior Medical Staff, Lenox Hill Hospital in New York City, until 2011. While at Lenox Hill Hospital, Dr. Segarra served on the Residency Advisory Committee, the Executive Committee of the Lenox Hill Hospital Healthcare Network, and the Administrative Board of the Hospital Physician Hospital Organization, where he served as chairman of the Membership and Contract Committees. Dr. Segarra was president of the Hugh R.K. Barber, M.D. Alumni Society from 1996-1999, and has been a fellow of The American College of Obstetricians and Gynecologists since 1993. In 2006, he was named to Castle Connolly Top Doctors in the New York Metro Area.

Dr. Segarra became board certified in Ob/Gyn in 1992 and has been recertified by the American Board of Obstetrics and Gynecology annually since 2003. In 1996, he was certified by the Accreditation Council for Gynecologic Endoscopy. In addition to delivering babies, Dr. Segarra developed a special interest and advanced skills in vaginal and reconstructive pelvic surgery and breast diseases. He ran the Gyn Breast Clinic at Lenox Hill from 1991 to 2001.

Dr. Segarra relocated to Southampton to join Hamptons Gynecology and Obstetrics in 2011. 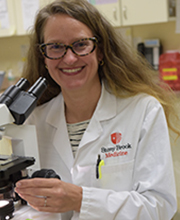 Dr. Lazar grew up on the North Fork of Long Island. After attending Brown University and the SUNY Stony Brook School of Medicine, where she graduated Alpha Omega Alpha, she completed her residency in Ob/Gyn at the Albert Einstein College of Medicine. In 2001, she returned to the East End and joined Hamptons Gynecology and Obstetrics. Her services at Southampton hospital has included Attending Physician, Chairman of the Department of Ob/Gyn, and Chairman of the Medical Records Committee. She now splits her time between New Orleans and Southampton, where she has a part-time gynecology practice. 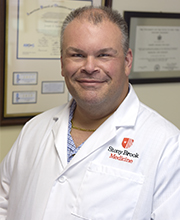 After completing his residency in 1999, Dr. Spataro started a private practice in Riverhead, New York. He joined Hamptons Gynecology and Obstetrics as a full-time physician in September of 2013. Dr. Spataro is dedicated to complete women's health care, including high-risk obstetrics and gynecological care which includes pelvic and laparoscopic surgery. 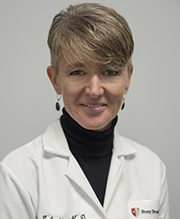 Dr. Schmitt attended the State University at Stony Brook and received a Bachelor of Science degree in 1990. She then attended medical school at the State University of Syracuse, graduating in 1994. She completed her residency in obstetrics and gynecology at Baystate Medical Center in Springfield, Massachusetts, where she also served as the ACOG Massachusetts Junior Vice-Chairperson.

She joined a private practice in Springfield and remained as an attending for three years, before returning to New York in 2001. Dr. Schmitt started East End Women's Healthcare, PC, in 2003 in Hampton Bays and has been providing gynecological services to women on the East End since then. In June of 2015, Dr. Schmitt proudly joined Hamptons Gynecology and Obstetrics. She is continuing to give the same level of care out of the Hampton Bays location.

Dr. Schmitt has been board certified since 2001 and is a fellow of the American College of Obstetricians and Gynecologists. She is also a board member of the International Surgical Mission Support and travels yearly to developing countries to perform gynecologic surgery on the underprivileged. Her interests include health and fitness, adolescent gynecology and minimally invasive surgery. 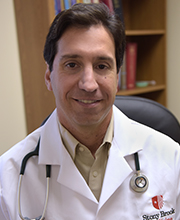 Dr. Bakas is the son of Greek immigrant parents. He grew up in the Hamptons, until going to Rutgers University for undergraduate school. While in college, he was pre-med and participated in athletics. After medical school, Dr. Bakas did a one-year rotating internship and a four-year Ob/Gyn residency at NYU Langone Hospital.

Dr. Bakas was in private practice and founded a prenatal care center in Westchester, NY. There he provided prenatal care and delivered several thousand patients over those twenty-one years. He has been involved in doing advanced laparoscopic procedures since his residency and performs all types of gynecological surgeries.

Dr. Bakas has been on multiple utilization review and safety committees throughout his career. He was also a core member of the Obstetrical Safety Initiative with his hospital for three years.

Having joined Hamptons Gynecology and Obstetrics in the summer of 2016, Dr. Bakas hopes his patients are comforted by his wealth of obstetrical experience, individual patient-centered care and kind-hearted demeanor. 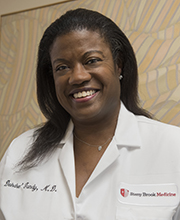 Dr. Gundy is a native New Yorker recently returning after 26 years in practice in Pennsylvania. Dr. Gundy attended St. John's University in Queens, where she graduated with a Bachelor of Science degree. Dr. Gundy attended Hahnemann University School of Medicine in Philadelphia, where she graduated with honors in 1992. She completed her residency in obstetrics and gynecology at Hahnemann University Hospital in 1996 and was board certified in 1998. She is a fellow of the American College of Obstetricians and Gynecologists. She continues annual recertification with the American Board of Obstetrics and Gynecology.

Dr. Gundy was an assistant professor of obstetrics and gynecology at the MCP-Hahnemann School of Medicine in 1998-2002. She implemented a minimally invasive gynecologic surgery program at Mercy Philadelphia Hospital in 2012 while continuing to provide surgical training for the Drexel University College of Medicine Obstetrics and Gynecology residents.

Dr. Gundy believes in comprehensive care for women, including mind, body and spirit. She has an interest in pediatric and adolescent gynecology, conservative management of fibroids, PCOS as well as minimally invasive surgery. 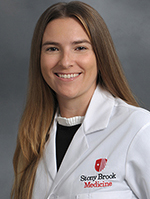 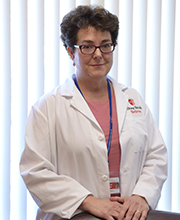 Deborah is a certified nurse practitioner with over 25 years of experience. She graduated from the Perelman School of Medicine at the University of Pennsylvania as a member of Sigma Theta Tau. Deborah previously worked in the Medical Intensive Care Unit (MICU) at the NYU Langone Medical Center and in Labor & Delivery at Morristown Medical Center. Additionally, she worked as a nurse practitioner in both private and clinical settings for five years prior to joining Hamptons Gynecology and Obstetrics in March 2000. 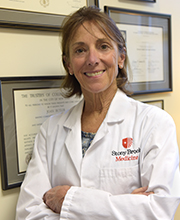 Joan is a women's health care nurse and certified nurse-midwife with over 35 years of experience. She received her medical education from the Columbia School of Medicine. Additionally, she is a certified nurse colposcopist, Merck trained for the Nexplanon device. Joan is a member of the National Association of Nurse Practitioners in Women's Health (NPWH) and the American Society for Colposcopy and Cervical Pathology (ASCCP). She joined Hamptons Gynecology and Obstetrics in 2011 after practicing in both private and clinical settings.

Joan's areas of special interest include adolescent gynecology, colposcopy, menopause, health promotion and fitness. She is the author of Fit & Pregnant: The Pregnant Women's Guide to Exercise During Pregnancy. 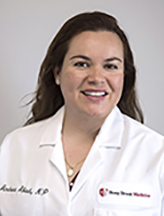 Andrea attended Stony Brook University, where she graduated with a Bachelor of Science degree in nursing. Andrea then worked at Southampton Hospital for ten years as an obstetrical nurse providing care to women in all different stages of labor, including postpartum aftercare. She completed her education at Stony Brook University, where she graduated with a master's degree in women's health as a nurse practitioner and is board certified by NCC. Andrea has applied her bicultural sensitivity to give the utmost care to all women. She is originally from Colombia and is bilingual.

Andrea has been with Hamptons Gynecology and Obstetrics since 2017. She is trained in many gynecological procedures, including colposcopy, nexplanon, and health promotion. Andrea has been a valued asset to our practice. 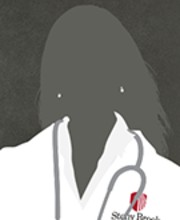 As a native New Yorker, Lara has been blessed to call Long Island her home. Lara graduated from Harvard University with a Bachelor of Arts in Sociology. She went on to the New York University Rory Meyers School of Nursing, where she completed the accelerated Bachelor of Science in Nursing program. Lara worked as a labor and delivery nurse at NYU Langone Hospital in Manhattan for five years. During her time as an L&D nurse, she discovered her love for physiologic birth and patient-centered holistic care and returned to NYU’s School of Nursing to complete her midwifery degree. Lara is also a certified yoga instructor in both prenatal and children’s yoga. She has a special interest in adolescent gynecological health, as well as a deep commitment to guiding women through healthy pregnancies and births. Lara’s goal is to ensure that women of all ages feel supported, understood and empowered in her care. She is thrilled to be part of the Hamptons Gynecology and Obstetrics family. 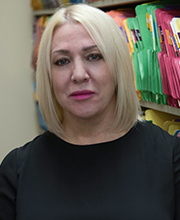