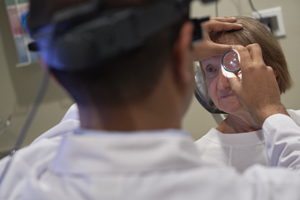 Stony Brook Medicine is the first hospital on Long Island and across the New York metropolitan area to implant a new commercially available retinal device known as the “bionic eye” to provide artificial vision for patients with retinitis pigmentosa.

After 20 years of blindness, the patient, Linda Kirk, 67, of Port Jefferson, can now distinguish light from dark, some shapes, and movements. And it all happened within 10 minutes after an implanted retinal device was activated within her eye at Stony Brook Medicine.

The device, called the Argus II retinal prosthesis system, is also known as the bionic eye. Implanted in her left eye, the device is used to activate “artificial vision” for patients with retinitis pigmentosa, a genetic disorder that breaks down cells in the retina and leads to partial or full blindness.

Stony Brook is just one of 19 sites that do this surgery in the United States, said Dr. Chaudhary. A second and third case were performed on Oct. 25 and Nov. 22.

This innovation at Stony Brook gives hope to those who have been completely blind for years with the degenerative condition. Ms. Kirk continues to learn more about the system and interpreting what she sees, as the brain adjusts to the “artificial vision” technology.

“The retinal prosthesis system consists of an intraocular portion, which has an external antenna and electronics case,” Dr. Chaudhary said. “The case attaches to an array that is placed inside of the eye on the retinal surface and tacked down. Once the surgery is done, the eye is given 3-5 weeks to heal at which point the device will be turned on. 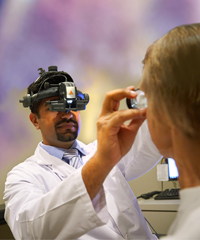 “The patient wears a pair of glasses that has a small camera over the bridge of the nose. The images the camera captures are transmitted to a video processing unit (VPU) that is placed on the hip of the patient (size of an old cell phone). The VPU converts the image and transmits it to an RF coil that is at the side of the glasses. The information is then transmitted to the intraocular prosthesis wirelessly, which gives the patient visual stimulations artificially.

Linda Kirk has been blind for over 20 years,” Dr. Chaudhary said. “She was living in a world where she may have been able to see a flicker of light using any residual functional retina she had. She was diagnosed with retinitis pigmentosa (a degenerative retinal disease) many years ago and was being seen at Stony Brook intermittently. There was no promising treatment for this degenerative disease until recently.

“We ended up surgically implanting the retinal prosthesis successfully, and thankfully she has not had any post-operative complications. The implant was turned on three weeks and two days after her surgery. The device was first set up to activate each electrode in the prosthesis via an external computer program. She had an excellent response when the device was turned on.

“Now the real hard part begins,” Dr. Chaudhary said. “She needs to understand how to use all of these new visual stimulations and understand the world around her using this new ‘artificial vision.’ This will take several sessions of visual rehabilitation and therapy post operatively. She will then be able to use these sensations to ‘visualize’ her world around her and help guide her from now on.”

Watch a brief video which captures Ms. Kirk’s new visual experiences once the device was activated, as she moved from a world of visual darkness to light.