According to the dietary guidelines for Americans published in 2010,

in the United States:

· 50 % of adults are current regular drinkers

· 4% of women consume an average of more than 1 drink per day.

· 29% of those who drink report binge drinking within the past month, usually on multiple occasions.  This results in 1.5 billion episodes of binge drinking in the United States each year.

Alcohol use can be harmful to your health.   According to the CDC, from 2006-2010, excessive alcohol use led to ~ 88,000 deaths and 2.5 million years of potential life lost each year.  On average this shortened the lives of those who died by 30 years.  Excessive drinking was also responsible for 1 in 10 deaths among adults between the ages of 20-64.  The costs of excessive drinking in 2006 were estimated at 223.5 billion or $1.90 a drink.

What is the definition of a drink?

In the United States one drink contains 0.6 ounces of pure alcohol. This equates to: 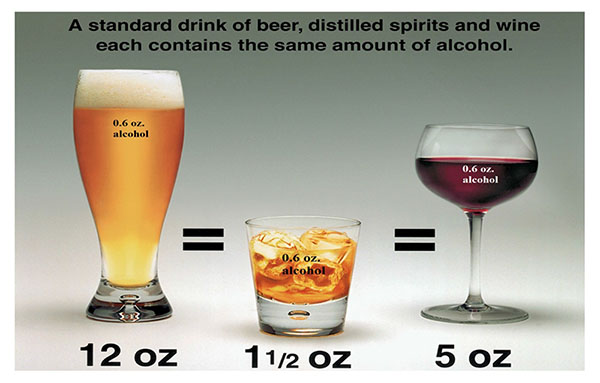 According to the Dietary Guidelines for Americans:

If alcohol is consumed, it should be consumed in moderation up to one drink per day for women and two drinks per day for men and only by adults of legal drinking age.

What is moderate alcohol consumption?

What is excessive alcohol consumption?

· Heavy drinking is defined as consuming

· Binge Drinking is defined as consuming

· For women, 4 or more drinks in a two hour period

· For men, 5 or more drinks in a two hour period

· Binge drinking is the most common form of consuming   alcohol.

Who Should Not Drink?

There are some persons who should not drink any alcohol, including those who are:

· Pregnant or trying to become pregnant.

· Taking prescription or over-the-counter medications that may cause harmful reactions when mixed with alcohol.

· Recovering from alcoholism or are unable to control the amount they drink.

· Suffering from a medical condition that may be worsened by alcohol.

· Driving, planning to drive, or participating in other activities requiring skill, coordination, and alertness.

What does it mean to be drunk?

Becoming intoxicated or “getting drunk” means to consume excessive amounts of alcohol.

Intoxication is harmful and results in:

· Dilation of blood vessels causing a feeling of warmth but resulting in rapid loss of body heat.

· Damage to a developing fetus if consumed by pregnant women.

· Increased risk of motor-vehicle traffic crashes, violence, and other injuries.

Coma and death can occur if alcohol is consumed rapidly and in large amounts.

According to the CDC:

Excessive alcohol use has immediate effects that   increase the risk of many harmful health conditions. These are most often the result of binge drinking and include the following:

·Injuries, such as motor vehicle crashes, falls, drowning's, and burns.

· Risky sexual behaviors, including unprotected sex or sex with multiple partners. These behaviors can result in unintended pregnancy or sexually transmitted diseases,

According to the CDC, over time, excessive alcohol use can lead to the development of chronic diseases and other serious problems including:

· Cancer of the breast, mouth, throat, esophagus, liver, and colon.

· Learning and memory problems, including    dementia and poor school performance.

By not drinking too much, you can reduce the risk of these short- and long-term health risks.

How do I know if I have a problem?

Alcohol use is a problem if it causes trouble in your relationships, in school, at work, in social activities, or in how you think and feel.

The following assessment tools can help determine if alcohol use is a problem for you.

1. Have you ever felt you should Cut down on your drinking?

2. Have you ever been Annoyed when people have commented on your drinking?

3. Have you ever felt Guilty or badly about your drinking?

4. Have you ever had an Eye opener first thing in the morning to steady your nerves or get rid of a hangover?

Your Score:  Score one point for each yes answer.

Item responses on the CAGE are scored 0 for “no” and 1 for “yes”, with a higher score being an indication of alcohol problems.

A total score of 2 or greater is considered clinically significant.

The TWEAK questionnaire is a modification of the CAGE questionnaire and includes a question about  tolerance.  It has good sensitivity for harmful drinking, dependency and alcohol use in pregnant patients.  Since its inception it has been found useful in the emergency department / trauma patient presentation setting as well.

· Tolerance:  How many drinks can you hold without falling asleep or passing out?  (2 points if six drinks or more)

· Worried:  Have friends or relatives worried about your drinking?  (2 points if yes)

· Eye-opener:  Do you sometimes take a drink in the morning when you first get up?  (1 point if yes).

· Amnesia:  Have friends or relatives told you about things you said or did while drinking that you could not remember?  (1 point if yes)

· Cut down:  Do you sometimes feel the need to cut down on your drinking?  (1 point if yes)

An answer of ≥ 6 to the first question or a total score of 3 or more denotes a problem with alcohol use and a need for further assessment.

Who Can I Turn To For Help?

Talk to your family and your friends.  Your will need their support throughout this process.

Your primary care physician can help guide you through your road to recovery.

The following websites offer help to people who wish to stop drinking: