Peyronie’s disease is when a male’s penis has an abnormal curvature during erection. Up to 7 percent of males experience Peyronie’s disease, and it is typically caused by penile trauma during sexual intercourse.Any injury to the tunica albuginea may result in scar tissue forming in the cells, which forms the plaque of Peyronie's Disease.

Signs that you have Peyronie's Disease are: 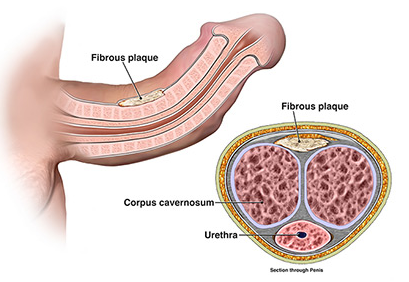 Peyronie's Disease is usually split into the acute and chronic phases. The acute phase is the first 6 to 18 months. During this time the plaque forms in the penis, and the curving of the penis continues to get worse. The chronic phase is when the plaque stops growing and then penis does not continue to curve.

The goal of treatment is to reduce pain and keep you sexually active. There is no cure. Education about the disease and its usual course is often included in the treatment plan. In some cases, treatment is not needed. Peyronie disease often happens in a mild form that heals on its own in 6 to 15 months. Treatment may include: