VARICOCELE AND ITS TREATMENT

VARICOCELE AND ITS TREATMENT

Varicocele is more common on the left side. The primary factor in testicular dysfunction secondary to varicocele suggested being abnormal retrograde blood flow within the gonadal veins. The etiology of varicocele is unclear and the most common theories include:

2.Incompetent or absent valves in the spermatic vessels with blood backflow.

The exact mechanism of impaired testicular function in patients with varicocele is not known. The most widely accepted concept presently is a varicocele-related increase of testicular temperature. It has been established that normally the difference between the intraabdominal and scrotal temperature averages 2.20C. Varicocele can cause an increase in scrotal temperature by 2.60C, neutralizing the required temperature gradient. The varicocele-associated pathology mainly includes changes in testicular size, histology, function of Leydig cells, sperm characteristics and testicular steroidogenesis. The WHO study reported that varicocele (most of which were on the left side) was associated with relative left testicular atrophy compared to the contralateral testis. In contrast, right and left testicular size was not significantly different in men without varicocele. Decrease of testicular volume was associated with increasing varicocele grade.

The changes in testicular histology associated with varicocele are varied from normal to Sertoli cell only pattern, but hypospermatogenesis and premature sloughing of germ cells were found to be the most common.

Leydig cell dysfunction has been documented in men with varicocele. It was suggested that hyperplasia of the Leydig cells is the poor prognostic factor for fertility. Additionally, the mean testosterone concentration of men with varicocele older than 30 years of age was found to be significantly lower than that of younger patients with varicocele, whereas this trend was not observed in men without varicocele in the WHO study. Conversely, significant increase in mean testosterone levels was documented after varicocelectomy without concomitant increase in FSH and LH levels. These findings suggest a detrimental time-dependent effect of varicocele on Leydig cell function.

The detrimental effect of varicocele on spermatogenesis in the subfertile male is manifested by low sperm count, decreased sperm motility and low percentage of normal sperm morphology together or in different combinations. This 'stress pattern', described by Macleod in 1965 is also characterized by an increased number of tapered forms and immature cells. However, the characteristic stress pattern is not a sensitive marker for varicocele and is not specific for this pathology.

Varicocele is a clinical diagnosis established by physical exam performed in the warm room. 78% of varicocele are left-sided, 1-2% are right- sided and up to 20% are bilateral. Unilateral right varicocele is rare and should alert the physician of possible association with right renal mass.

Varicocele may be graded in severity as follows:

Grade I: present only with Valsalva

Grade III: visible through the skin ("bag of worms")

The goal of treatment of the varicocele is to obstruct the refluxing venous drainage to the testis while maintaining arterial inflow and lymphatic drainage. The relationship between varicocele, altered spermatogenesis, and infertility is now widely accepted and varicocelectomy is the most common surgical procedure for infertility in males. The term varicocelectomy is a misnomer. The procedure should be termed internal spermatic veins ligation, as the dilated veins are actually ligated but not removed.

Varicocelectomy was found to improve the biopsy score independent of the duration or size of the varicocele. These results strengthen the concept that varicocelectomy improves testicular function.

The reliable prognostic factors for the outcome of varicocelectomy are lacking.

Recently neural network has been created (within Neural Computational Project for Urology) to predict a greater or less than 20 million sperm/cc density in the post-varicocelectomy semen analysis (http://godot.urol.uic.edu/varix_d20_1hn.html). The varicocele network uses information from the pre-operative physical exam, hormone serology, and clinical history to predict the outcome of varicocelectomy in the post-operative semen analysis. The network was trained on data that was collected from 172 male infertility clinic patients. The predictive value of this neural network is unclear since it attempted to predict only one semen parameter.

A variety of surgical approaches have been advocated for varicocelectomy. They include minimally invasive procedures, such as laparoscopic varicocele and transvenous percutaneous embolization ligation, and the traditional open surgical approach (retroperitoneal, inguinal and subinguinal).

Percutaneous venous embolization is a nonsurgical approach that may be performed with angiographic catheter introduced via the transfemoral or jugular routes under sedation. The catheter is then advanced into the spermatic vein, which is occluded using detachable balloons, coils, sclerosing materials or polymerizing tissue adhesives. There is no risk for hydrocele, postoperative recovery is very short with minimal pain. Disadvantages include long duration of the procedure, failure to access the internal spermatic vein, radiation exposure and recurrent varicocele. The success of this procedure is clearly dependent upon the skill and experience of the interventional radiologist. Since the access to the right internal spermatic vein is very difficult and requires significant time, bilateral percutaneous embolization procedure is usually not indicated.

The advantages of inguinal (and subinguinal) approach are that it enables the surgeon to easily identify the spermatic cord structures, and if necessary, access the testis, epididymis, and the external spermatic and gubernacular veins. Use of magnification is strongly recommended (preferably, an operating microscope)

Subinguinal approach popularized by Dr.MarcGoldstein is most commonly used presently by male infertility specialists. The major advantage of this approach is more direct approach to the spermatic cord, external spermatic veins. The small incision (corresponding to the length of the testis) is more comfortable for the patient with less postoperative pain since there is no incision of aponeurosis. The delivery of the testis is recommended to isolate and divide gubernacular veins and external spermatic perforators. Gubernacular veins have been demonstrated radiographically to be the cause of up to 10% of varicocele recurrences. After testis is returned to the scrotum, spermatic cord is elevated on the Penrose drain and ligation and division of dilated internal spermatic veins is performed under the operating microscope with 8-15 power magnification. (All pictures: Dr. Marc Goldstein, Cornell Medical Center, with permission)

Subtle pulsation will usually reveal the location of the testicular artery. One percent papaverine solution irrigation may help to identify the artery by potentiate the pulsation. The artery is dissected free of all surrounding veins and encircled with a 0-silk ligature for identification. Unidentified periarterial vein may be the important source of recurrence. The vas deferens is inspected for any abnormally dilated veins. Veins measuring 3 mm or greater should be divided as these can also lead to postoperative recurrences. Two sets of vessels usually accompany the vas deferens in the spermatic cord and at least one of these sets must be preserved to ensure venous return following varicocelectomy. The majority of lymphatics have to be preserved as these can contribute to hydrocele formation postoperatively when divided. 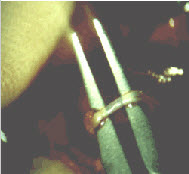 At the completion of varicocelectomy, the cord should contain only the testicular artery or arteries, vas deferens with the vasal vessels, cremasteric muscle (with its veins ligated and artery preserved), and lymphatics. Several passes "through" the spermatic cords may be necessary to ensure the complete ligation of all dilated internal spermatic veins.

Use of the operating microscope allows for reliable identification of spermatic cord lymphatics, internal spermatic veins and venous collaterals, and the testicular artery or arteries so that the incidence of these complications can be reduced significantly. Delivery of the testis through a small subinguinal incision provides direct visual access to all possible avenues of testicular drainage. In addition, men with larger varicocele have poorer preoperative semen quality, but repair of varicocele results in greater improvement than repair of small varicocele. Microsurgical varicocelectomy provides a safe and effective approach to varicocele with preservation of testicular function, improvements in semen quality, and improvements in pregnancy rates in a significant number of men.

Complications following varicocelectomy include hydrocele formation, epididymitis, injury to the internal spermatic artery and persistent or recurrent scrotal varicocele. Fortunately, this occurs in less than 3-5% of patients.

The operation improves semen quality in 70-80% of men. Varicocelectomy is known to improve sperm count and have variable effect on sperm motility and morphology.

Some studies indicate improvement of strict morphology by primarily improving head defects. Since the head of sperm is crucial to egg and sperm interaction, this decrease in head defects may be partially responsible for increase in pregnancy rates after varicocele repair.

The varicocele repair may improve sperm function (documented by improved hamster egg penetration test postoperatively) even in the absence of an improvement in bulk semen parameters.

Nevertheless, the couple should understand that varicocelectomy may only preserve present sperm quality and halt its further decline. Controversies regarding the efficacy of varicocelectomy may be resolved only in prospective randomized multicentered studies with large number of patients operated using similar surgical technique