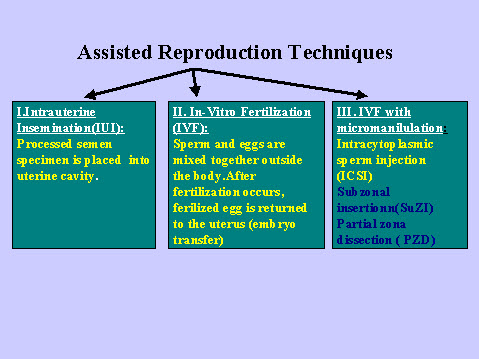 IUI is most effective in couples with " cervical factor infertility" indicated with poor postcoital tests. In general, men are considered candidates for IUI if all male factors have been corrected or unexplained infertility is suspected. Severe abnormalities in semen parameters indicated low success rates for IUI. Worse prognosis for IUI correlated with poor sperm motility. Although IUI has been attempted with sperm count as low as 190.000 motile seprm, the most IUI pregnancies were documented with more than 1x106 motile sperm in the specimen. No more than 6 cycles of IUI are recommended since no pregnancies are usually achieved beyond 4-5 cycles of IUI.

In some cases, preliminary sperm function tests may be considered to assess sperm-egg interaction in vitro. If results of these tests are poor, the couple should be advised of other methods of Assisted Reproduction.

Although male factor infertility was considered a contraindication to IVF, fertilization and live births are possible with abnormal sperm. The rates of fertilization with poor quality sperm are significantly lower than sperm from otherwise healthy men, even when sperm are placed directly with oocytes in culture. In addition, the needed concentration of 100000 sperm/oocyte cannot be easily obtained from patients with male factor infertility.

The technique of IVF includes down regulation of women's pituitary function with GnRH agonists during the preceding luteal phase followed by controlled ovarian hyperstimulation using FSH. After follicles development confirmed by transvaginal ultrasound and serial measurement  of serum estrogen and progesterone levels, final oocytes maturation is induced with IM injection of hCG. Transvaginal oocyte retrieval is performed under ultrasound guidance.

Processed and washed free of seminal fluid sperm in concentration, preferably, 100000 or more per oocyte are used to inseminate oocyte. In case of successful fertilization embryo are incubated in vitro for 2-3 days to divide up to 8-cell stage and, then, transfer back to the uterus. Usually up to 4 embryos may be transferred.

Intracytoplasmic sperm injection with superior fertilization and pregnancy rates completely replaced PZD and SuZI for the treatment of male factor infertility. This is the most aggressive mechanical micromanipulation technique which involves direct microinjection of a single sperm into the cytoplasm of the oocyte. ICSI surmounts the last barrier of the oocyte, the oolemma. Since first successful ICS procedure performed by Palermo et al. in 1993, this technique has gained the worldwide acceptance because it almost completely bypasses the male factor infertility. The procedure requires only 1 viable sperm per oocyte for injection and basically independent of sperm quality. Refinement and widespread use of sperm retrieval techniques enables use ejaculated as well as epididymal and testicular sperm from patients with severe male factor infertility and azoospermia. Fertilization rates were shown to be independent from female factors, but implantation and pregnancy rates are significantly lower in couples with maternal age above 34 ( 49%, 23% and 6% respectively at <34, 35-39 and >40 years)

ICSI can cause significant mechanical damage to oocyte. Rates of oocyte loss reported to be 7-14%.

Indications for ICSI (Schlegel PN, Girardi SK, 1997) include but not limited to:

Ovarian stimulation for oocyte retrieval is performed according to the protocol of IVF. Thirty-six hours after induction of ovulation with 10000I.U hCG, oocytes are retrieved by ultrasound-guided puncture of follicles. Only mature oocytes of metaphase II are used for the injection. Metaphase II oocytes are identified by the presence of extruding of the first polar body. The microinjection performed with an injection pipette under the microscope equipped with micromanipulator, after oocyte is stabilized with holding micropipette. The single sperm is injected head first after the micropipette is pushed through zona pellucida and oolemma at the 3 o'clock position.

Present data do not suggest increased risk of genetically transmitted diseases in children born after ICSI. Major malformations were found in a range of 2.4%, which is comparable to figures known from children born after IVF or natural conception. Nevertheless, patients need to be counseled before any treatment on the basis of the available data about the risk of transmitted chromosomal defects, de-novo chromosomal aberrations and fertility problems to the offspring.