Rumke and Wilson first reported the presence of antisperm antibodies in infertile men in 1954. The incidence of sperm autoimmunity in infertile couples is 9-36% in contrast to 0.9-4% in the fertile population. The incidence of detection of sperm antibodies in the fertile male is 8-21% and in the female 6-23%. Immunological cause may contribute to 5-15% of the male infertility factors

ASA can be defined as immunoglobulines of the IgG, IgA and/or IgM isotype that is directed to various aspects of the spermatozoa (head, tail, midpiece or combination thereof). Immunoglobulin M is too large molecule to cross into the semen. Immunologic infertility is probable if more than 50% sperm are bound to IgG or IgA antibodies. It may be suspected if more than 10% spermatozoa are antibody bound. These immunoglobulines can be found in both males and females and in serum, semen and cervical mucus. 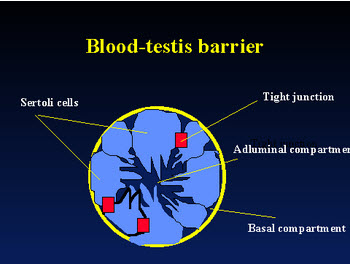 The blood-testis barrier, the tight junctions between Sertoli cells appears to play a major role in keeping the developing spermatozoa and immune system separate. It prevents those testicular cells expressing "foreign" antigens from coming into contact with lymphoid tissue and immunocompetent cells from entering the seminiferous tubules. However, the BTB is commonly breached by physiological leakage of normally sequestered sperm antigens. Since tight junction does not protect all intratesticular sperm autoantigen due to the presence of autoantigenic cells (spermatogonia and early spermatocytes) below the junction in the basal compartment, other immunosuppressive mechanisms are necessary.

Some of the proposed mechanisms are:

3. Immunomodulation distal to the testis (T-suppressor cells in the epididymis and immunosuppressive activity of seminal plasma)

The sperm antibodies in men are polyclonal, that is directed at more than one sperm antigen. The possible effects of immunologic reaction to fertility are:

2.Binding of antibodies to posttesticular spermatozoa and inhibiting their effective transport in male reproductive tract

5.Direct immobilizing effect of sperm antibodies on spermatozoa in the female tract. Enhancement of phagocytic clearance of spermatozoa by macrophages.

9. Induction of sperm immunity in the female

Risk factors of development of male antisperm antibodies (ASA) have been reviewed by Heidreich et al. (1994) 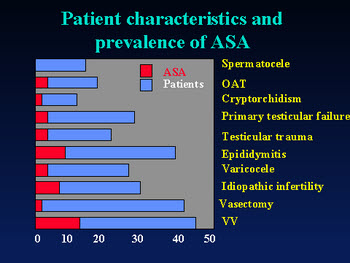 Antisperm antibodies were found in 25-56% of men with chronic prostatitis.It is suggested that the presence of antisperm antibodies on the sperm of the male partner may induce an immune response in the female partner, although most studies of Intrauterine Insemination did not confirm increased incidence of ASA. Women with pelvic infection have a higher incidence of sperm immunity (up to 59%). Antibody production is linked to chlamydial, mycoplasmal and ureaplasmal infection. 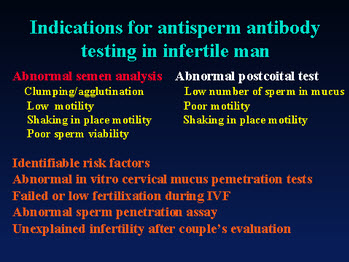 Overall, in the male it is best to measure ASA directly on the sperm. Only semen carries inhibitory effect of a manís antibody to subsequent reproductive events. Therefore, it is important to discover whether antibodies are present on sperm, not in serum. Azoospermia is the only exception when serum testing is necessary. IgG are the only immunoglobulins that transsudate and secretory IgA present on mucous membranes. IgM is a very large molecule that does not transsudate to the reproductive tract; therefore, such testing is unnecessary.

Most treatments for immunologic infertility have been disappointed because of poor results, adverse effects or high cost.

The most common form of immunosuppressive therapy for ASA has been coriticosteroid therapy. Unfortunately it has resulted in improvement of the pregnancy rate in only one of three controlled double blind studies. Lengthy treatment required for possible effect leads to coriticosteroid side effect in approximately 60% of patients. Problems include mood changes, fluid retention and dyspepsia are common but some complications such as GI bleeding and aseptic necrosis of the hip joint are quite serious.

33 % pregnancy rate was seen in one uncontrolled study with cyclosporine.

Methods of preventing binding or separate antibody- free sperm in the laboratory indicate conflicting results. Splitting of the ejaculate was not effective in limiting the degree of binding. There are mixed report on simple sperm washing. Sperm antibody binding was also not reduced by Percoll gradient separation. The investigational techniques presently include

Protease treatment to destroy antibodies on the sperm surface

IUI affords some increase in pregnancy rates over no treatment but this increase may be modest. Antibody induced deficit of the fertilization process will not be completely circumvented by IUI The reported average success rate for IUI in couples with male factor antisperm antibodies is 20%. Increased ovarian hyperstimulation may yield better results in such treatment plan but has not been well studied.

Pregnancies with GIFT have been achieved in couples who failed washed sperm IUI and steroid therapy. ICSI is the current accepted advanced ART treatment in men with high level of ASA. In one study where ASA binding approached 80%, the mean fertilization rate, embryo development and pregnancy rate were comparable to another cohort of ICSI cases without immunologic infertility. If these results will be confirmed by another studies, ICSI should be the primary choice for patients with high immunologic infertility.