I.Ultrasound in the evaluation of infertile male

Ultrasonography is being used with increased frequency in the evaluation of the infertile male. Minimally invasive and non-invasive sonographic procedure have become a readily available tools for the diagnosis of many disorders of male reproductive tract and largely replaced previous "gold standard" radiological procedures.

Sonographic evaluation is dependent on operator experience and the knowledge of the disease process. It is very important to know normal ultrasound anatomy of male reproductive tract.

In most instances testis is seen as a homogenous structure with a salt-and pepper texture. In the adult it measures approximately 3.5cm in length and 2-3 cm in diameter. 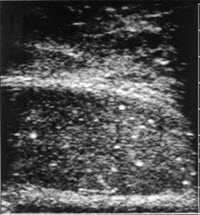 Scrotal ultrasound is employed for the evaluation of testicular size, intra-and extratesticular masses. Most intratesticular lesions in the age group concerned about fertility are malignant, benign lesions such as microlithiasis, intratesticular cyst, old hematoma may be found. Examination of the epididymis is helpful for the diagnosis of epididymal cyst or spermatocele. They are usually hypoechoic and circumscribed with good through transmission and posterior wall enhancement. In certain situation spermatocele may become obstructive and cause azoospermia.

The hydrocele, fluid filled tunica vaginalis sac surrounding testis, is easily diagnosed with an ultrasound. Hydrocele may be associated with testicular tumor or epididymal obstruction as a consequence of epididymitis.

The diagnosis of a varicocele with scrotal sonography include standard measurement of venous diameter and color flow Doppler study which allows to determine the direction and magnitude of venous blood flow. The values used to define a positive exam have varied considerably in the literature. The presence of a subclinical varicocele may be confirmed if the largest scrotal vein is greater than 3 mm (with or without Valsalva, number of veins increased (>3), the largest vein is 2-3 mm with reflux or 2mm at rest with increase in diameter >0.5 mm with Valsalva.

The principal application of transrectal ultrasonography in the infertile men is to evaluate patency of distal excurrent ductal system of the male genitalia. Although gold standard for evaluation of male ductal system is vasography, TRUS has the advantage of being non-invasive Transrectal ultrasound allows visualization of seminal vesicles, prostate and ejaculatory ducts.

Sonographic evaluation of the prostate is performed in search for midline intraprostatic cysts, Mullerian duct cysts and ejaculatory duct diverticula. In one study these abnormalities were observed in 14% of infertile group (Jarow, 1993)

The main indication for diagnostic testis biopsy remains to distinguish between obstructive and nonobstructive causes of azoospermia. Testis biopsy is absolutely indicated for the well-androgenized azoospermic man with normal size testes, normal or minimally elevated FSH and no evidence of retrograde ejaculation in the postejaculatory urine. The findings of normal spermatogenesis in the biopsy specimen indicate potentially correctable obstruction. Another indication for diagnostic testicular biopsy is the prediction of local spermatogenesis in patients with non-obstructive azoospermia and identification of the mature sperm for ICSI procedure The small size of the testes and elevated FSH level is no longer a contraindications for the testicular biopsy in these patients since focal areas of spermatogenesis were found even in patients with maturation arrest and Sertoli-cell only syndrome. Therefore, the biopsy specimen should be evalated not only for predominat, but also for most advanced histological pattern.

Diagnostic testicular biopsy is always performed bilaterally. The assistant stretching the scrotal skin tightly over the anterior surface of the testis, making sure that epididymis is positioned posteriorly. Bilateral 5-mm transverse scrotal incisions are carried through the skin and the dartos muscle and the tunica vaginalis is opened. Bleeders on the edges of the tunica vaginalis are cauterized. After the tunica albuginea is exposed, a 5-0 or 6-0 vicryl suture on a small tapered needle is applied. All bleeding vessels are coagulated prior to incising the tunica albuginea to prevent saturation of the biopsy specimen with blood. It was previously shown that medial and lateral parts of the upper pole are less likely to contain major branches of the testicular artery and these areas have been recommended for biopsy sites. A 3 to 4 mm incision is made with the 11-blade into the tunica albuginea below the stay suture. Testis compressed and a 4-5 mm in length sample of seminiferous tubules excised with an iris scissors and deposited directly into either Bouin's or Zenker's solution. Formalin fixation results in severe distortion of the testicular histology and should never be used. A second specimen ("touch prep") is performed by touching the cut surface of the testicular parenchyma with the glass slide, adding a drop of saline or Ringer's and covered by cover slip. Next, the "squash prep "is performed by cutting an additional small piece of testicular parenchyma with iris scissors, placed it on the glass slide, minced it with scissors, add a drop of normal saline and cover with cover slip. Both preps are examined under a microscope using phase contrast. The presence of sperm with tails, especially motile, on the squash prep is almost 100% predictive of obstruction. The tunica albuginea is closed with a running 5-0 vicryl suture applied previously. Tunica vaginalis is also closed with a 5-0 vicryl suture. Skin is closed with single 5-0 subcuticular Monocryl suture. The wounds are covered with Bacitracin ointment and a fluff type dressing held in place with snug scrotal supporter. No antibiotics are unnecessary.

The use of operating microscope allows to avoid damages to the blood vessels, which may contaminate biopsy specimen and lead to devascularization of the significant portion of testicular tissue. Under 6-10X magnification scrotal skin is incised transversely (1 cm) and incision deepend through dartos muscle. Superficial skin vessels are avoided. Tunica vaginalis is incised. Tunica albuginea is exposed and transfixed with 5-0 vicryl stay suture after avascular site was identified. A 5 mm incision of the tunica albuginea performed with a 15 0 ultrasharp microknife taking care to avoid tiny branches of the testicular artery that course transversely in the tunica albuginea. These vessels are difficult to see without the magnification. After obtaining the biopsy specimen with subsequent wet and squash preps, careful hemostasis is achieved using bipolar cautery. Tunica albuginea is closed with a 5-0 running vicryl stay suture. Tunica vaginalis is also closed with 5-0 vicryl.

Percutaneous puncture of the testis with 21-gauge and 19-gauge needle is a less invasive procedure, which has been used for diagnostic purposes. Yet, this sampling method allows mostly cytological evaluation because it contains only a limited quantity of aspirated testicular cells sufficient, however, for the diagnosis of normal spermatogenesis. The procedure may be performed under local anesthesia using the same avascular landmarks previously described.

Percutaneous testicular biopsy may also be performed using a cutting needle of core biopsy system (ASAP 18 or 14) using one pass through the testis. This technique helps to obtain more material for histopathological diagnosis than needle biopsy and identification of nature spermatids. It was suggested that correlation between needle and open testicular biopsy may be related to the status of spermatogenesis and consistency of the tissue.

Needle biopsy is associated with fewer complications (bleeding) than open biopsy, although the effect of diameter of the needle and the use of aspiration to the intratesticular bleeding/damage is unknown. In many cases, careful direct microsurgical control of bleeding vessels during open biopsy may be more efficient than in blindly performed percutaneous needle biopsy. Acute changes of testicular parenchyma after open testicular biopsy resolves within 6 months, leaving linear scar or calcifications.

Despite percutaneous biopsy is safe and reliable office procedure which is better tolerated by patient in most cases, only open biopsy offer sufficient quality specimen for detailed histopathological evaluation and also provide significantly more spermatozoa for assisted reproduction.

Four techniques for vasography have been described: vasopuncture, vasotomy, retrograde catheterization via cystoscopy and transrectal puncture. Isolated vasography (by vas puncture) is rarely performed because of the risk of subsequent vasal scarring and is usually a part of microsurgical reconstructive procedure. For this reason it is not indicated to perform vasography at the time of testicular biopsy with the findings of normal spermatogenesis.

If open vasography is planned, bladder should be catheterized with Foley catheter and balloon inflated with air to outline bladder neck area. After scrotal exploration, vas deferens identified and isolated at the junction of the straight and convoluted portions. Under the operating microscope vasal sheath incised vertically and vasal vessels preserved. Short segment of the vas cleaned and hemitransected using 15 0 ultrasharp knife until the lumen is revealed. The sheath of 25-gauge angiocatheter is inserted in the abdominal portion of the vas deferens. Vas then flushed with normal saline (the term "vasogram" at this point is a misnomer, since no contrast is injected and no X-rays are taken). If injection is easy with minimal pressure, the vas deferens is patent. In case of resistance to the injection, the formal vasogram performed with 1:2 diluted nonionic contrast, while gentle pressure is applied to the Foley catheter to prevent reflux of the contrast into the bladder and table put on the slightly reversed Trendelenburg position. If obstruction is confirmed at the level of ejaculatory duct, Methylene blue may be added to the contrast since it enables the control of the depth and efficacy of transurethral resection of the ejaculatory ducts

The application of the 32 gauge soft radiopaque epidural catheter has been described for the vasography. The catheter is advanced down the vas deferens and vasogram performed. Because catheter is radiopaque, its position in the vas can be confirmed prior to injection. If needed, the catheter could be advanced further to obtain better details. If no further microsurgical reconstruction is performed, vasotomy site is closed with a microsurgical technique using 10-0 monofilament Prolene or nylon for mucosa, 9-0 nylon for muscularis and 6-0 Prolene for adventitial layer.

The puncture technique employs a 30 gauge lymphangiogram needle placed through the wall of the vas deferens in the direction of the prostate this technique, also less invasive, may be associated with a higher risk of creating of submucosal false passages with subsequent scarring and obstruction

The injection of saline or contrast should never be done towards the epididymis because of the high risk for damaging the epididymal tubules.