In order to properly understand the causes and treatment of male infertility it is essential to appreciate the normal anatomy and physiology of male reproduction.

The human male reproductive system includes the hypothalamic-pituitary-gonadals axis, the epididymis, vas deferens, seminal vesicles, prostate and the urethra. Production of spermatozoa requires approximately 3 months from the initial mitotic division. The testis is composed primarily of seminiferous tubules packed closely together (95% of testicular volume), and interstitial cells. Each tubule is 30-70 cm long and 200-300 microns in diameter. There are approximately 500 tubules per testis. The cells within the seminiferous tubules are germ cells that mature into spermatozoa, and Sertoli cells that serve as supporting cells for developing germ cells. Sertoli cells create a blood-estis barrier, and separate the germinal epithelium into basal and adluminal compartments.

The major cell in the interstitial space outside the seminiferous tubule is the Leydig cell, which produces testosterone, a necessary component for germ cell maturation. Male fertility requires the production by the testes of large numbers of normal spermatozoa through a complex process of spermatogenesis. This process is divided into three major parts: 1. Mitosis- the multiplication of spermatogonia 2. Meiosis-reduction of chromosome number from diploid to haploid. Type B spermatogonia is converted into primary spermatocyte which divides to secondary spermatocyte and divide again to form round spermatids.3. Spermiogenesis-transformation of round spermatid into the spermatozoon.

The mature spermatozoon is released into the tubule lumen. It is approximately 60 microns in length. The head consists of the condensed nucleus, the acrosome, membrane-bound organelle that contains the enzymes required for penetration of the egg prior to fertilization. The tail consists of a middle piece containing mitochondria, the principal piece, and an end piece. Sperm form the seminiferous tubule enter the 6-8 efferent ducts connecting the testis to the caput epididymis. The epididymis is a single convoluted duct 3-4 meters in length, and is divided anatomically into caput (head), corpus (body), and cauda (tail). Epididymis serves as sperm conduit and sperm reservoir where sperm acquire motility and fertilizing capacity. 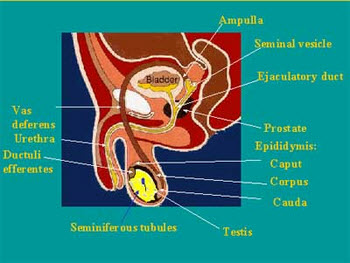 The vas deferens is approximately 35 cm tubular structure with distinct muscular layer. It is divided into convoluted, straight and ampullary portions. According to anatomical location the vas deferens is divided into scrotal, inguinal and reproperitoneal portions. Vas deferens is an androgen-dependent organ and transports sperm into the pelvis, where it joins the seminal vesicles to form the ejaculatory ducts, the largely collagenous tubes, which enter the prostatic urethra. Just prior to ejaculation, the testes are brought close to the abdomen and fluid is rapidly transported through the vas deferens to the ejaculatory duct and subsequently into the prostatic urethra.

Transport of spermatozoa through the female reproductive tract is very rapid: it takes about 15 minutes to reach abdominal cavity and about 1 hour to reach mature egg. Before fertilization occurs, spermatozoa undergo certain modifications including 3 major steps: capacitation, hyperactivation and acrosome reaction.

Endocrinology of male reproduction. Pulsatile hypothalamic release of GnRH stimulates the secretion of FSH and LH by anterior pituitary. These hormones then act at the level of the testis. LH stimulating testosterone production by the Leydig cells, and FSH acting on the Sertoli cell to support spermatogenesis. Serum testosterone and inhibin ( Sertoli-cell product) downregulate LH and FSH secretion via negative feedback loop. 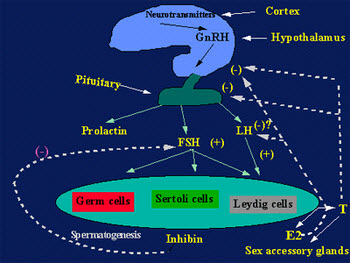