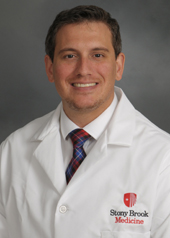 The Stony Brook Gastroparesis Center, under the direction of Salvatore Docimo Jr., DO, MS, offers a multidisciplinary approach that brings together experts in the areas of surgery, gastroenterology, psychology, and nutrition. Consultations/appointments: 631-444-8330/-2274.

The center's goal is to provide patients with digestive disorders, especially gastroparesis, a wide spectrum of diagnostic and treatment options under one roof.

Gastroparesis, or delayed gastric emptying, is a stomach disorder in which food moves through the stomach into the intestines slower than normal. (The etymology of "gastroparesis" is: gastro- from ancient Greek γαστήρ gaster, "stomach" and πάρεσις -paresis, "partial paralysis.")

Patients often experience chronic nausea, vomiting, bloating, feeling full too soon after starting to eat, and weight loss. It is a debilitating condition, at times requiring hospitalization, and can significantly affect a person's quality of life.

Common causes include diabetes and previous surgery. Diabetes has been noted to be a cause in 30% of gastroparesis cases. However, neurological disease, collagen vascular disorders, viral infection, and drugs have all been blamed.

Gastroparesis, if not cured, requires management with a long-term care plan.

Gastroparesis may result in the following complications, which, in addition to potentially problematic symptoms, justify treatment:

Saltine crackers, jello, and graham crackers have been reported to improve symptoms. Patients with severe nutritional deficiencies may require having a feeding tube placed.

A thorough review of medications may identity certain medications that are known to cause or worsen symptoms of gastroparesis.

Metoclopramide is FDA approved for use in treating gastroparesis. However, side effects such as sedation, restlessness, and acute dystonia have been noted.

Any discontinuation and prescribing of medications must be discussed with a patient's surgeon and primary care physician.

Surgical treatment options for gastroparesis include implantation of a gastric electrical stimulator (GES), pyloroplasty (open or laparoscopic), total gastrectomy (removal of the stomach), and the per-oral pyloromyotomy (POP) procedure.

These options should be reserved for patients with symptoms that have not responded well to lifestyle modifications and medical management.

GES involves surgical implantation of an electrode device in the muscle of the stomach. The device delivers high-frequency, low-energy stimuli to improve gastric contraction.

Studies have demonstrated a significant overall improvement in symptom scores and gastric emptying with GES. However, the benefit appeared to be less for those with idiopathic (no known cause) and post-surgical gastroparesis.

Feeding tubes are often placed surgically for treating gastroparesis. One approach is to place a feeding tube through the abdominal wall into a part of the small bowel. Liquid nutrition is then administered through the feeding tube.

Another method, using a gastroscope, is to place a feeding tube into the stomach and an additional tube extending into a portion of the small bowel.

Such feeding tubes may or may not improve symptoms such as nausea or vomiting. However, most patients will experience some amount of weight regain.

This minimally invasive procedure involves surgically cutting the pylorus, a disc-shaped muscle that allows emptying of the stomach. 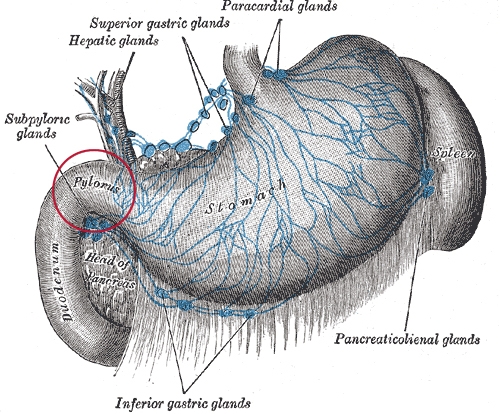 Cutting of this muscle aims to improve passage of food contents from the stomach into the small intestine.

The POP procedure is a newly developed minimally invasive treatment that offers patients attractive benefits, compared with other surgical therapies. (It also is called G-POEM, which stands for gastric per-oral endoscopic myotomy.)

POP involves use of an endoscope (thin flexible tube). It is an alternative to surgical pyloroplasty.

There are generally no incisions made on the body, as everything is done through an endoscope that is passed through the mouth, into the esophagus, and down into the stomach.

The physician uses a small knife at the tip of the endoscope to create a tunnel to the pylorus, which is then cut, and the tunnel is closed.

The POP procedure offers an option for patients who need to avoid the problems associated with surgery. Most patients will be in the hospital for one day and require a post-procedural upper gastrointestinal study.

For consultations/appointments with the specialists of the Gastroparesis Center, please call 631-444-8330/-2274.