There were hugs and happy tears all around, when 23 Stony Brook Medicine staff members returned home on Nov. 8 after more than two weeks of treating patients in Puerto Rico.

Family and friends were waiting in the hospital lobby as the group bounded off the bus from Newark Airport. Holding up handmade “Welcome Home” signs, loved ones let loose with applause and cries of “I missed you!” and the more generic but equally heartfelt “Woo-hoo!” 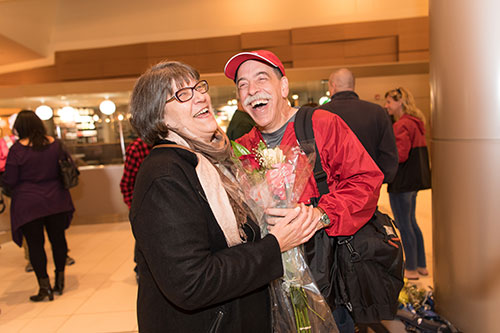 Puerto Rico has been crippled since Hurricane Maria slammed into the island. Some people were left homeless by the storm. Others searched in vain for a pharmacy or primary care practitioner’s office still in operation. Stony Brook Medicine staff helped these people in need, as part of a 78-member relief team from hospitals around the New York metropolitan area.

The Stony Brook group – three physicians, two nurse practitioners, nine nurses, four paramedics, four nursing assistants and one pharmacist – split up after arriving in Puerto Rico. Most were stationed in the city of Manatí, while the rest went to the city of Fajardo and then on to the U.S. Navy’s hospital ship USNS Comfort. They worked closely with military personnel, federal agencies and the people of Puerto Rico.

“We saw well over 2,000 patients just in the time we were there,” said team medical director and emergency medicine specialist Rolando Valenzuela, MD, addressing the returning volunteers as they decompressed in the hospital lobby. “All of those people got care because of what you did.”

Pediatric trauma surgeon Richard Scriven, MD said the team treated patients with diarrhea, conjunctivitis, abscesses, severe cuts and broken bones. Urgent care and critically ill patients were also seen aboard the USNS Comfort and in Manatí, where patients with the most urgent conditions were eventually transported to a local hospital by the U.S. Army.

Stony Brook practitioners gave much-needed relief to Puerto Rican healthcare professionals, who have been working hard since the hurricane hit.

Stony Brook and Puerto Rico connected in many ways on the trip. With a guitar that somehow survived the storm, a man named Santos sang his thanks (in English and Spanish) to those who traveled “to help our beloved Puerto Rico.” Back home on Long Island, team leader Trevor Marshall, MD, held up his phone and played the haunting melody and emotional lyrics for all to hear.

Dr. Valenzuela recalled the local people who came to volunteer and “just showed up, day after day, to help care for their community.” Dr. Scriven spoke of the resilience and good humor found everywhere in Puerto Rico. “People are living through horrendous adversity,” he said. “But they were so friendly, and funny, and so appreciative. One guy had a bad burn and he came back later with a pizza for us.”

Victoria Roth was reunited with her wife Elise Roth, an RN in neurology. Elise missed the couple’s sixth wedding anniversary, but while she was in Puerto Rico she sent Victoria a video of her Stony Brook colleagues singing “Happy Anniversary.” “This trip was an incredible experience,” Elise said. “It was a life-changer, no doubt, in every way possible.”

Thanks came from Kenneth Kaushansky, MD, Chair of the Greater New York Hospital Association, Dean of Stony Brook University School of Medicine and Senior Vice President of Health Sciences. “All of us at Stony Brook Medicine are so extremely proud of our Puerto Rico relief team. The work they did over the past few weeks was heroic, generous in the extreme and so worthwhile. Having heard many of their experiences, I cannot say enough about the team members and their devotion, and I know that we have 23 members of Stony Brook Medicine who have returned very much better for the experience and will soon be back at work on a slightly longer island (Long Island is eight miles longer than Puerto Rico), to continue their efforts to improve the health of all patients in need.”

Eric Niegelberg, Hospital Associate Director of Operations for Emergency Services and Internal Medicine, thanked the families of the returning volunteers. He also praised hospital staff who stepped up to cover extra shifts. And he noted the sacrifices made by the relief team themselves. “They’ve been working 12-hour days every day,” he said, “sleeping on a cot or in a sleeping bag, in a pretty austere environment.”